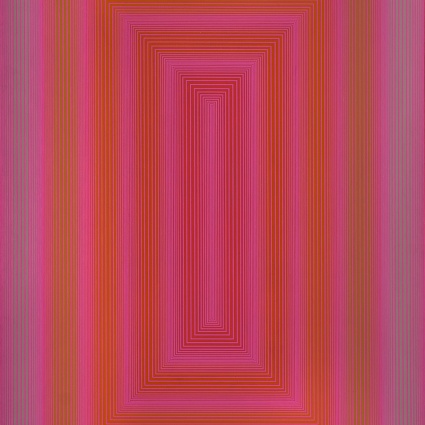 Quote
“I’m interested in making something romantic out of a very, very mechanistic geometry. Geometry and color represent to me an idealized classical place that’s very clear and very pure.”

Richard Anuszkiewicz was a contemporary American artist best known for his mesmerizing Op Art paintings. Anuszkiewicz's works are saturated with vibrant color arranged in jarring geometric abstract compositions, formally exploring the phenomena of light, color, and line and their effects on human perception. “I’m interested in making something romantic out of a very, very mechanistic geometry,” Anuskiewicz once said. “Geometry and color represent to me an idealized classical place that’s very clear and very pure.” Among his most famed works is Deep Magenta Square (1978), a hypnotic composition featuring the illusion of oscillating movement through contrasting color relationships. Anuszkiewicz’s interest in optics perhaps stems from his study under famed colorist Josef Albers while attaining his MFA at Yale University between 1953 and 1955. Later in his artistic career, he experimented further with the physical effects of optic phenomena through sculpture, creating geometric works that mimic his two-dimensional compositions.

Born on May 23, 1930 in Erie, PA, his work was well-received in the 1960s and beyond, garnering his inclusion in the Venice Biennale and documenta, as well as various honors including a 2000 Lee Krasner Award. The artist died at his home in Englewood, New Jersey on May 19 2020, just four days before his 90th birthday.